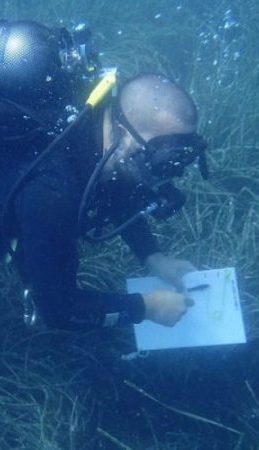 Born in Thessaloniki, Ioannis holds a BSc in Biology from the Aristotle University of Thessaloniki, and an MSc in Fisheries Biology and Management from the same university. Between 2011-2013 he was working as a research assistant in the Ionian Dolphin Project of Tethys Research Institute monitoring the local population of marine mammals in the Ionian Sea, while between 2013-2015 he acted as the Principal Investigator of the same project. In 2011, Ioannis participated in the annual Johan Hjort cruise for the stock assessment of the Norwegian Exclusive Economic Zone in collaboration with the Institute of Marine Research in Bergen. In 2018, he worked for 5 months, in the Joint Research Centre of the European Commission, on science communication and community building of the European Alien Species Information Network. Since 2016 Ioannis is the Fisheries Director of the Environmental Organisation iSea.

His main interests include the elasmobranch conservation, historical ecology and conservation policy and he has been working extensively with the fishing and diving community in several Mediterranean countries. To date, Ioannis has coordinated several projects related to elasmobranch conservation, he is the delegate of Greece in the European Elasmobranch Association, member of the Task Force for Sharks and Rays of the Mediterranean Science Commission (CIESM) and member in ICES Working Group on the History of Fish and Fisheries. He has participated in several COST Action Programmes compiling 3 Short-Term Scientific Mission (STSM) while he further participated in the Mediterranean Angel Sharks: Regional Action Plan and he is currently coordinating the Sub regional Action Plan for the conservation of Angel Sharks in GSA 20, 22 and 23. Ioannis joined MER in 2020 and he is primarily involved in the 5-year ELIFE project which aims to improve the conservation of elasmobranch species (sharks and rays) in the Mediterranean by promoting best conservation practices in professional fishing.

Ioannis has published more than 30 articles in peer-review scientific journals and presented more than 40 scientific communications in international conferences. He speaks 3 languages (Greek, English and Spanish) and he is a PADI Open Water Scuba Instructor.