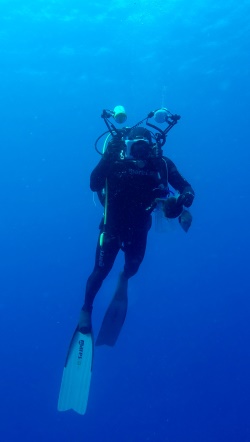 Demetris grew up having a strong connection with the outdoor. He was intrigued by nature, the underwater, biodiversity and ecosystems. He received his BSc and MSc (thesis option) in Marine Biology at Florida Atlantic University (Department of Biological Sciences), carrying out his thesis in Florida Bay investigating phosphorous and enzymatic activities in water column fractions and the dominant benthic seagrass species. In 2008, upon his return to the island of Cyprus he founded MER and since then he operates as the Director and Principle Investigator, leads field expeditions, composes reports and research proposals. Between 2011-2018 he carried out his PhD at the University of Plymouth (School of Biological and Marine Sciences) studying the anthropogenic impacts to marine oligotrophic ecosystems. His research was conducted in Cyprus and involved a number of case studies on invasive species, on the effects of coastal industrialization and offshore aquaculture on macroalgal communities of shallow rocky reefs and seagrass meadows, on applying macroalgal and seagrass biotic indices, on long-term monitoring of Posidonia oceanica from fixed positions and on IMTA trials with extractive invertebrates to biomitigate fish farm effluents.